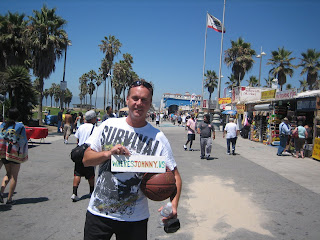 On Monday we woke up early and drove through Beverly Hills and found ourselves on Venice Beach. Now the first thing I wanted to do was play Basketball where the movie White Men Can't Jump was filmed. The guys obliged with a game of HORSE which Big Al won by eliminating me with a 3pt bank shot. After hoops we walked pass all the vendors (they have nothing on Positive J with Island Vibes) and found a place to have lunch. Venice is officially the place to people watch; Str8 guys everywhere. When lunch was finished we headed for the Pacific Ocean to do a little body surfing. I must say the sand was nothing like the sand back on our beaches. The sand was brown, dry, and gritty compared to the soft plush white sand that I am accustomed to; but the view of mountains on both sides was new to me. Beautiful! Once we finished taking it all in it was time to head to Anaheim and get ready for the Rays-Angels game. 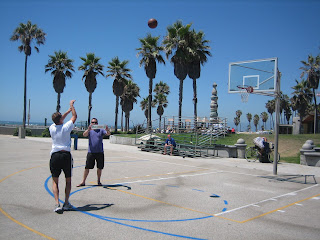 Yes; I made this shot and yes the Rays won the first of three beating the Angels 4-3. Soriano struck out the bottom of the 9th with 9 str8 pitches. 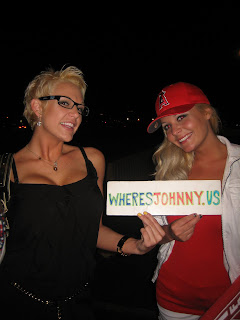