Leaving Joshua Tree National Park sooner than I thought I decided to turn around ten miles later to go back and walk a trail I passed on earlier. Hiking the trail I think back the last five days and realized the places I have seen and the people I have met. Big Al and Ryan treated me like their own brother every step of the way. Thanks again guys for everything.
I arrived in San Diego around 3pm Friday and easy enough found a perfect spot to park. I was one block from the Gas Lamp District. Walking around town I wound up in front of Petco Park; the Phillies are here on a three game series. Standing around for a few minutes I am offered a free ticket; so I go in. My seats are in section 316 way up there; but it didn't matter for this makes five games in six days in three different ball parks. I was just happy to be there. Did I mention the view yet. What a beautiful DOWN TOWN BALLPARK!! Every restaurant, cafe, deli,or bar was thriving before and after the game. Phillies won in extra innings.
Saturday morning waking up to the waves crashing on shore I feel like I'm home for just a thought. I go for a walk along the beach and find myself in front of the Del Coronado Hotel known famous for the movie Some Like It Hot starring Marilyn Monroe. 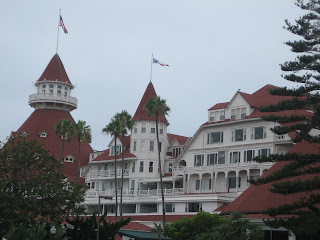 I get back to the Jeep and decide to go back to San Diego and park; then take the train to the border and walk across to have lunch. No problem getting in; but a two mile line waiting to get back across. It was all well worth the experience. I noticed even the poorest of mankind has a beautiful smile.